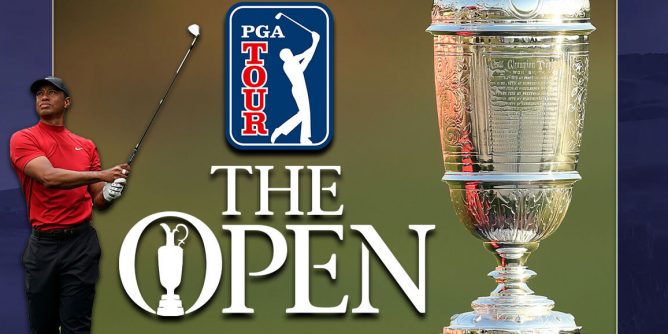 In great company at tonight’s Past Champions Dinner. The last few days have been so wonderful, and I cannot wait for a historic week of golf ahead. pic.twitter.com/XCv9Amth9B

The betting favorite to win the Open Championship is Northern Ireland’s Rory McIlroy. He is always well-liked by the oddsmakers and public, so this doesn’t come as a surprise. What is a surprise is that Rory is +1000 and the next closest golfer is +1800.

VALUE ON TIGER WOODS TO WIN THE OPEN CHAMPIONSHIP?

Tiger Woods’ betting odds to win the Open Championship might be tempting, and as a lottery ticket-type play, there isn’t any harm in taking a shot. Just don’t be surprised when Tiger isn’t featured on the final day.

Up close with @TigerWoods on the range.

Tiger has played two tournaments this year. He entered the Masters and the U.S. Open. His health concerns have prevented him from playing in more tournaments. It would probably do him more harm than good because of his injury risk.

We’re going to go over Tigers Woods’ betting odds to win, and most importantly, if he will make the cut in 2022 at St. Andrews.

Tiger Woods History at the Open Championship and St. Andrews

Tiger Woods has won the Open Championship on three occasions. He won the British Open in 2000 at St. Andrews. This was his sixth attempt in his career at the British Open. Yeah, Tiger was playing golf for a while before he exploded in the late 90’s and well into the 2000’s.

His first tournament at St. Andrews was in 1995. At the time, making the cut was a success for him. Now in 2022, making the cut at the Open Championship would be seen as a small win.

En route to victory at The Old Course in 2000, @TigerWoods navigated 448 bunkers over 4 rounds …

And didn’t go in a single one 🤯 pic.twitter.com/TRjDFk8e8y

Tiger didn’t stop at winning the 2000 tournament. He won back-to-back Open Championships in 2005 and 2006. The first of two back-to-back wins was at St. Andrews, and then he followed up at Royal Liverpool.

He missed the cut in his most recent attempt at St. Andrews in 2015.

Tiger made his next appearance in the Open Championship in 2018 and he impressed. He finished well at T6 and -5 to par. That is one of his best efforts at a major over the last five years. However, he didn’t make the cut in his most recent Open Championship performance in 2019 at Royal Portrush.

Keeping his odds afloat at +6600 comes from public perception. There will be people that bet on Tiger regardless of his form or chances of winning the tournament. Oddsmakers can thus inflate his price.

So what should Tiger Woods Open Championship odds be? Probably closer to +8000 or +10000 with Bryson DeChambeau and Billy Horschel. I’d rather take a shot on Horschel at +10000 than Tiger at +6600.

Will Tiger Woods Make The Cut?

A Case For Tiger Woods To Make The Cut

Tiger Woods is familiar with this course at St. Andrews. Old Course isn’t a stranger to Woods. He first appeared at St. Andrews in 1995 and has played this set up in the past.

Woods has entered five tournaments at St. Andrews in his career. He’s only missed the cut once and has notched two wins on these grounds in Scotland.

He’s been at St. Andrews putting the work in with practice rounds. Tiger hasn’t appeared to have many complaints about his health or the golf course in general.

He wasn’t considered to play well at the Masters, but did, at least for the first two days.

Tiger came out firing at Augusta National and made the cut. He ran out of gas and wasn’t able to hang around on Saturday and Sunday, but still outplayed expectations in the first two rounds.

A Case For Tiger Woods To Miss The Cut

What can of shape can we reasonably expect Tiger to be in at St. Andrews? In his latest tournament, he had to withdraw from the U.S. Open. Since playing well in the first two rounds at the Masters, Woods hasn’t shown much on the golf course.

He collapsed in the third and fourth round at the Masters, as he finished 47th at +13. Woods returned at the PGA Championship an did not look confident.

Tiger walked around in evident pain from leg injuries sustained in a car accident. He’s lucky to even be playing again after that wreck, so entering tournaments is a win itself. And remember, that he was already bothered by back problems.

He had to work hard to get out of a bunker without falling down, so Tiger wasn’t in the best of shape. This was only a few months ago. It’s tough to expect Tiger to be ready to play in top form.

The odds for Tiger to make the cut are at -175. That’s too inflated. There is no value in a bet that should be closer to even money. For that reason alone, give me plus money on Tiger to miss the cut. If he plays well, great, because I’m pulling for him, but there’s more value on the opposite happening.

WILL TIGER WOODS MAKE THE CUT?