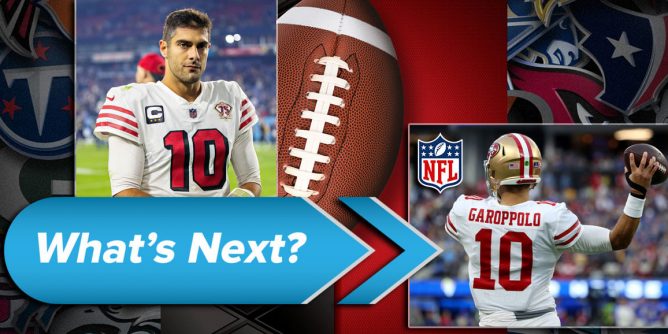 Football season won’t come around for another few months, but that doesn’t mean you can’t still bet on the NFL. In fact, the top NFL betting sites have you covered with up-to-the-minute odds on props, futures, and even 2022 game lines all summer long.

Trade rumors have swirled around San Francisco 49ers quarterback Jimmy Garoppolo for over a year. The writing seemed to be on the wall when the Niners traded up to nab Trey Lance third overall in the 2021 draft, but Jimmy G. subsequently led the 49ers to another appearance in the NFC Championship Game.

Garoppolo acquitted himself well last season despite some calling for Lance to take over as the full-time starter. Many expected San Francisco to finally cut bait with Jimmy G. this offseason, but, as of this writing, he’s still on the 49ers’ payroll.

Many expect the Niners to contend for another NFC crown in 2022, though there is still all sorts of uncertainty at the most important position of them all. Whether Lance is ready to take the QB1 job remains to be seen. For now, the Niners appear willing to wait for the best offer before deciding to move on from Garoppolo. The fact that he underwent shoulder surgery in March likely tanked his trade market, for now.

If Garoppolo does leave San Francisco this offseason, where will he go? BetOnline is giving you the chance to put money down on Jimmy G.’s next stop.

We know the Houston Texans are rebuilding, but they don’t seem too interested in trying to upgrade the quarterback position right away. That’s probably because Houston is still several years away from winning anything of substance.

Garoppolo is now 30. While he’s never going to rank among the league leaders in most statistical categories, he has proven during his time in the Bay Area that he can steer the ship of a winning team. The Niners nearly won the Super Bowl just two years ago against the Chiefs before coming close to another berth in the big game this past season.

As of now, the Texans seem content with Davis Mills as the presumptive starting quarterback. The former Stanford product showed flashes of potential during an uneven rookie campaign, but there’s no telling whether he’ll be able to hack it as a full-time starter moving forward. There was no can’t-miss QB prospect in the most recent draft class, either, which is why the Texans passed on taking any signal-callers.

The only other quarterbacks on Houston’s depth chart as of now are Kyle Allen and Jeff Driskel, who are, at best, NFL backups. Garoppolo would be an instant upgrade at the position over anyone on the Texans’ roster.

The issue is there is no real reason for the Texans to part ways with any tangible assets in order to trade for Garoppolo. The Niners would prefer to net something in a trade, but it’s not like Houston is going into next season with grand aspirations. They’re going to lose a lot of games again, and they’re fine with that, for now.

Garoppolo has also said he would prefer to play for a winner at this stage of his career. While the Texans have tried hard to turn themselves into Patriots South with their personnel moves over the years, GM Nick Caserio doesn’t seem willing to move heaven and earth to reunite with Tom Brady’s former backup. If he really wants to win, Garoppolo seems rather unlikely to sign with Houston if the 49ers eventually cut him.

Pass on the Texans’ +150 Jimmy Garoppolo odds. I don’t see a logical fit here for anyone involved.

The Panthers have spent most of the offseason with the best Jimmy Garoppolo odds of any team. Carolina has cycled through a number of QBs in recent years, from Cam Newton to Teddy Bridgewater to Sam Darnold and back to Newton again. Needless to say, they’re still looking for the answer to the question at that position.

Carolina reportedly emerged as a suitor for Garoppolo, but they then selected Ole Miss QB Matt Corral in the third round of the draft. Corral is expected to duke it out with Darnold for the Panthers’ starting job in training camp, and his selection seemingly put an end to the Garoppolo speculation.

However, ESPN’s Jeremy Fowler said the Panthers may still be open for business even with Corral in the mix. Darnold may be the favorite to start, but the Panthers are reportedly still open to adding another veteran QB to contend for snaps. Garoppolo and Browns quarterback Baker Mayfield have both been linked to the gig.

Corral has some talent, but he’s unlikely to be ready to start right away. It’s also safe to say that Darnold, who struggled yet again last season, is not a solution. The Panthers do have some interesting talent on both sides of the football, so it’s not unreasonable to think this team could be a capable quarterback away from making some noise in the NFC playoff race as soon as next season.

The Niners likely won’t be asking for too much in exchange for Jimmy G. with how close we’re getting to training camps, which could open the door for the Panthers in trade talks. You can do worse than taking a flier on Carolina’s +300 Jimmy Garoppolo betting odds ahead of the 2022 campaign.

The Lions are just one year removed from the blockbuster trade that sent Matthew Stafford to SoCal in exchange for Jared Goff and a heap of draft picks. The Lions do seem to have found their coach of the future in Dan Campbell, but it’s also safe to assume Goff is not the long-term answer under center for Detroit.

Of course, the Lions run into the same problem the Texans do. If Jimmy G. is serious about wanting to play for a winner, Detroit certainly doesn’t fit the bill. This franchise hasn’t made the playoffs since 2016 or won a postseason game since 1991. Garoppolo was two months old the last time the Lions tasted victory in a playoff game.

most expensive QB rooms next year:

If the Lions were to make a move for Garoppolo, he would likely just be a placeholder while the team continues its search for a franchise passer. If winning games isn’t a huge priority in the meantime, why not just let Goff continue as the Band-Aid QB? Trading valuable pieces for a marginal upgrade from Goff to Garoppolo makes no sense for a Lions franchise that needs to hoard as many of those assets as it possibly can.

The Niners have also done an excellent job of surrounding Jimmy G. with good talent over the years. A stable offensive line and weapons like Deebo Samuel, George Kittle, and Raheem Mostert will make just about any QB look competent enough. The Lions have a few decent starting blocks in D’Andre Swift and Amon-Ra St. Brown, but the offense as a whole is very much a work in progress.

The Lions’ +350 odds aren’t much more advantageous than the Panthers’ +300 number. I’ll still side with Carolina in this Jimmy Garoppolo prop bet.

The main question with regard to the Seahawks’ Jimmy Garoppolo odds is whether the Niners would be willing to ship their starting QB to a divisional rival. These two teams have a lot of recent history with one another, and you can bet 49ers GM John Lynch won’t be eager to aid the Seahawks in their new rebuilding process.

Seattle signaled a shift into a different direction with the trade earlier this offseason that sent Russell Wilson to Denver. Seattle did land Drew Lock in that blockbuster, but it’s hard to imagine Pete Carroll seriously thinks Lock is the future franchise QB. Geno Smith and Jacob Eason are the only other names on the depth chart, and Jimmy G. would be an easy upgrade over all three.

ESPN analyst Louis Riddick said earlier this week the Seahawks should be “all over” Garoppolo if the 49ers wind up cutting him loose. In that scenario, it’s hard to argue. Garoppolo likely won’t command a hefty free-agent deal if he’s released, and signing him wouldn’t require the Seahawks to send anything to the rival 49ers.

We’re both in agreement, if Jimmy Garoppolo becomes available he is the best option at quarterback for the Seahawks. pic.twitter.com/m1kEO0SgyP

If the Niners are unable to find a trade partner, cutting Garoppolo may be the only feasible route. Like Kyle Shanahan in San Francisco, Carroll runs a run-heavy offense in Seattle. The Seahawks wouldn’t need Garoppolo to play a starring role, but the team does have a couple of high-end weapons in DK Metcalf and Tyler Lockett already in the fold.

Signing Garoppolo may help the Seahawks stay competitive as they look to move forward in the post-Wilson era. There’s no way the Niners will sign off on a trade sending him to the Pacific Northwest, but I do like the Seahawks’ +350 Jimmy Garoppolo odds in the event the 49ers eventually cut the signal-caller.

The 49ers may have missed their opportunity to trade Garoppolo. Now that he’s recovering from shoulder surgery with the draft in the rearview mirror, the trade market has likely gone dark.

At this point, releasing the former Pro Bowler is likely the smartest course of action for all involved. The Niners won’t get anything in return, but they would be able to hand the reins to Lance without any sort of QB controversy heading into training camp. Garoppolo would also get the chance to choose his next destination.

If that comes to pass, the Seahawks’ +350 Jimmy Garoppolo odds are too good to ignore. Carolina would be the next best option at +300, while I don’t think Houston (+150) or Detroit (+350) stand much of a chance in the Jimmy G. sweepstakes.