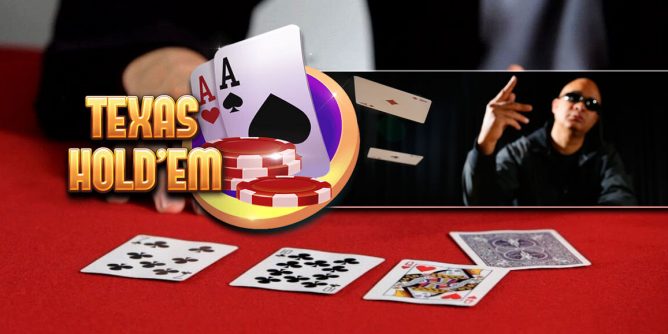 Folding is never sexy but being able to swallow your ego and fold when it is the right play is key to making money in the long run when you are playing Texas Hold’em.

While it isn’t the most exciting part of the game, accurate Texas Hold’em folding is a play that must be in your playbook if you want to be a winner.

With players that are newer to Texas Hold’em, the single biggest leak in their game tends to be not folding nearly often enough! But that isn’t always the case, as sometimes, players are going to fold too often, costing them money.

What Is Folding In Texas Hold’em?

Folding is part of the game when you are playing Texas Hold’em. Any time that the action is on you, folding is going to be one of your options.

Whether you are folding pre-flop, on the flop when facing a bet or a raise, or on the river, folding is always going to be part of the equation. Simply put, Texas Hold’em folding is any time that you give up during a hand, tossing your cards back to the dealer, to live to fight another day. You never win a single chip after you fold, but you don’t ever lose any chips either, and you have to look at folding as an integral part of the game.

When To Fold In Texas Hold’em

Knowing the right time to fold in Texas Hold’em isn’t something that you can explain easily.

When you are playing poker:

Everything is always going to be game specific, as no two scenarios are ever exactly the same.

But there are going to be some guidelines that can help guide you to making the right decisions that you are going to want to keep in mind at the table.

When The Math Doesn’t Add Up

If there were a single tip that I would give to beginning players when playing Texas Hold’em, it would be to do the math before making your decision to call or fold.

You don’t need to be a math expert to quickly calculate the odds the pot is offering you, to help you decide if a hand is worthy of a call or not. Poker is a game where you want to make as many informed decisions as possible and calculating the pot odds is one of the best ways to do it.

I will give you an example below of how knowing the pot odds can take what might appear to be an easy call and turn it into an easy fold.

Take A Look At This Hand:

You are heads up on the river with top pair and a decent kicker against one player. You check and your opponent bets $20 dollars into a $100 dollar pot. Some quick back of the napkin math tells you that the pot is laying you 6-1 on a call (call $20 to win $120). That means that you need to win about 20% of the time in order for your call to have a positive expected value (EV).

Against most players, that is going to be a snap call, as top pair is going to likely be good enough to justify a call when you only have to win 20% of the time. But what happens if in the exact same scenario, your opponent bets $200?

Now you have to be right about 70% of the time (call $200 to win $300) to have a positive EV. Now that same hand is an easy fold, as there are far too many hands that are going to beat your top pair to be able to make the math add up.

There are certainly other factors you are going to want to take into account when you are trying to decide if you should fold but knowing the math will help guide your decision. If the math doesn’t add up to a call, save your chips for a better spot and fold!

When You Know You Are Beat

I hate to ever generalize when talking poker strategy, but if you know you are beat, you should just fold. We can dive deep into expected value, pot odds, implied pot odds, stack sizes, image exploitation, and millions of other higher-level poker concepts, but a lot of the time those are just overthinking things.

Dan Harrington revolutionized poker a generation ago when he introduced players to the concept of KISS poker. What does KISS stand for? Keep it simple stupid! Most poker players love to show off how “good” they are at the poker table, but Action Dan kicked it old school and reminded players that playing fancy doesn’t always mean you are playing well.

If you think you are beat, fold your hand. Don’t fall into the trap of overthinking it or trying to show the world how great of a player you are. Most of the time if all you do at the poker table is bet and raise with the best of it and fold when you have the worst of it, you are going to be in good shape.

When You Are Out Of Position

Even some of the best Texas Hold’em players in the world get out of line by playing too many hands out of position.

Unlike stud poker, where the position changes during the hand depending on how the cards fall later in the hand, in Texas Hold’em, the dealer button never moves during the hand, so whatever position you start the hand in, is the same position you are going to end the hand in. Poker is easier to play when you are in position. You get to see what the other players do before you are forced to act, and that additional information is invaluable when it comes to making proper decisions.

Sometimes you can get away with guessing at the poker table, but the more info you have, the better choices you will make, and the more money you will win in the long run.

When There Is An Aggressive Player To Your Left

Part of playing poker is keeping a close eye on the players that are going to act behind you. We just talked about how you want to play in position as much as possible, but there are inevitably going to be times where you are going to be playing hands with players still left to act after you.

There is nothing worse than trying to limp into a pot pre-flop only to see the next player to act pop it and turn your cheap flop into an expensive one.

Always be aware of what action is coming and who is behind you when determining if you should fold in Texas Hold’em. If you are playing in a cash game you are going to want to change seats to get out of that tough spot, but if you are in a tournament, you are stuck and must learn to adjust.

If all other things are equal, you need to play tighter, and thus fold more often, when you have an aggressive player to your left.

Hands To Fold In Texas Hold’em

While I don’t want to over-generalize any hands here, we all know what second-best hands are. These are hands where you are drawing to small flushes, the bottom end of straights, or hands that are going to make top pair, but the kicker won’t be big enough to actually hold up to win the pot.

If you find yourself consistently in spots where you are chasing a hand that is only going to get you into trouble, you need to tighten up and fold more often.

There are going to be plenty of times where you are drawing to nut hands and stronger holdings, and with those hands, you can play them confidently knowing that when you do get there, you can get paid off. There is nothing worse than drawing to the sucker end of the straight, only to get there and lose even more money when it’s not good enough to scoop the pot.

To the untrained eye, those hands may seem basically the same. But trust me, they aren’t!

Connectors are great hands in multi-way pots, as you can smash a coordinated board, make a big hand, and get paid big time.

But those types of hands tend to play the best as drawing hands, and it is much easier to flop a profitable draw with a connector than it is with a gapped connector.

Stick to your connector drawing hands, and unless the situation is ideal, you’ll want to just throw those gapped connectors away.

That play any ace mentality can get you into a lot of trouble, as all aces aren’t the same. An ace/rag hand, something like an ace/8, ace/6, or ace/4, can be difficult to play well, as you are rarely going to feel great about your weak kicker, even if you are lucky enough to flop top pair.

And with so many other players playing most ace hands, that kicker is going to come into play a lot more than you might think.

When you are playing ace/rag hands, you are going to have to proceed with extreme caution, and that isn’t a winning style of poker.

Suited ace/rags are going to play a bit better, as making the nut flush is a powerful hand, but be careful when you limp in with that ace/6 suited and flop top pair, as they can be a big drain on your win rate when all you flop is top pair.

Multi-way pots are hard to win. If you are heads up in a pot, you can easily win with a single pair, and sometimes even just a high card is enough to win. But the more players that are in the hand, the better hand you are going to need to make to win.

You are very rarely going to see a hand that has 6 or 7 players left on the river that is won with just a single pair. Knowing that you need to make a big hand to win a multi-way pot, you should only be drawing to big hands!

I will never understand when players are calling with middle pair, for example, in multi-way pots, hoping to make two pair, that they know won’t be good enough to win!

Stay away from mediocre drawing hands, and instead, focus on making nut type hands.

If there are a bunch of players in the hand, you want to go big or go home, as mediocre hands can cost you big money!

We have all watched poker wizards on TV make what seem to be impossibly tough folds.

And while the game flow skills needed to attain that true poker wizardry level will take table time, as you can see from above, folding doesn’t always have to be so tough as there are lots of times and hands, where folding is the clear play to make.

Are you ready to get in on the Texas Hold’em action to try out these new tips?

Before you take a seat at the table, make sure that you swing by TheSportsGeek’s Texas Hold’em sites page, where we bring you exclusive offers at all of the top online poker rooms. Poker is all about value and there isn’t any place on the web where you are going to find more free money than our Texas Hold’em page!