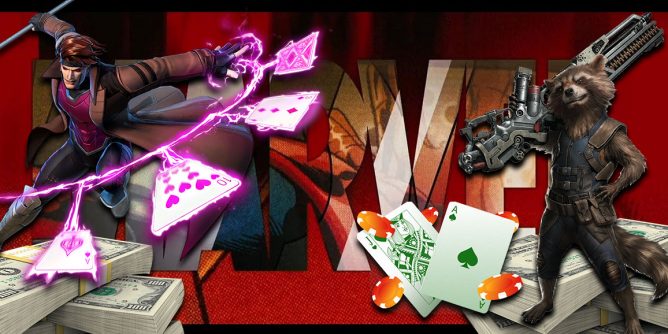 There are many Marvel comic book characters who would excel at gambling. So many, in fact, that coming up with a Top 10 list was a far bigger challenge than one would expect! To succeed in, say, a game of Texas Hold’em or Blackjack, one has to have a wide range of virtues and traits — it’s really not as simple as it might seem to the uninitiated!

IT TAKES A LOT

Intellect, intuition, the ability to conceal one’s thoughts and emotions, good judgment, a steadfast approach, mental fortitude, and so on and so forth; the list is seemingly endless. Marvel comic characters (at least a good number of them), have these characteristics in spades.

And so, naturally, they’re more than worthy of our time and attention! Our list includes both heroes and villains, all of whom are listed in no particular order:

A brooding loner, an outcast and, at times, an alcoholic. A mean dude, too, one with a stoic persona, a wounded heart, and a proclivity for sheer and utter carnage. Wolverine is as courageous as he is unrelenting in his aggression.

He is, by all means, a unique character — one of Marvel’s best and most beloved, in fact.

We don’t think Logan would win all that often (his volatile nature would surely get the better of him), but he would nonetheless make for a most interesting adversary!

Tony Stark: philanthropist, billionaire industrialist, genius inventor, business magnate, and undoubtedly one of the smartest (and most charismatic) Marvel comic characters around! A man like him can do whatever he so desires, and if that happens to be gambling, we’re pretty darn sure he’d excel at that too!

He has nothing concrete to gamble for seeing how he’s basically set for multiple lifetimes. That, however, only means that he’d compete for the thrill that comes with winning — and he’d be a real tryhard, too.

Remy LeBeau is about as stylish as his name would imply. His ability to make inanimate objects explode might not be all that exciting on paper, but he’s actually a far more capable mutant than you’d expect.

A thief by trade, Gambit used to work for all sorts of people, and that list includes a series of conflicting extremes — with Mister Sinister on the one end and the X-Men on the other.

And it is precisely this duality that makes him one of the more fascinating Marvel comic characters out there: an anti-hero, an individual capable of both great, heroic deeds but also some truly sinister behavior.

Nicholas Joseph Fury. Spy, former director of S.H.I.E.L.D. and the founder of the Avengers. How’s that for a resume? The list doesn’t stop there either: he was also a Colonel in the United States Army and a CIA operative during the Cold War.

To do all of these things and to succeed and thrive in a world of superheroes and supervillains, Nick Fury had to develop — and, perhaps most importantly, sustain — a series of exceptional virtues, all of which would surely help him out a great deal in, say, a game of Texas Hold’em!

Then again, gambling online would probably be the best course of action after a long and drawn-out day “at the office!”

An “old school” character and also one that has a most staunch following. Which self-respecting comic book fan hasn’t heard of Blade the vampire hunter?

Granted, he might not be as popular as some other entries in our list, but whatever he might lack in fame or “reputation” he more than makes up for in sheer swagger and an origin story that’s unlike any other!

His superhuman senses would no doubt come in clutch should he ever decide to gamble a bit on the side. His ability to withstand vampire bites, on the other hand, wouldn’t be of much use, so we’ll label that one as a “nice-to-have.”

One of the most unique anti-heroes the Marvel universe has to offer. An iconic character, no doubt, and an individual who would surely excel at any and all forms of gambling.

Frank Castle is a guy you do not want to double-cross, and that holds true in as wide a range of ways and meanings as you can possibly imagine.

This alien symbiote isn’t exactly known for its intellectual prowess, but whatever it might lack in brains it more than makes up for in sheer brawn and a kind of physicality that would no doubt instill a primordial fear in its opponents.

You wouldn’t feel all that well if you had to play a game of poker next to a guy with a skull for a face — a skull which just so happens to be ablaze.

Ghost Rider’s grotesque physiognomy sure does make him stand out from the crowd. He’s not necessarily the sharpest tool in the shed, but his intimidation tactics would no doubt come in handy should he ever sit down at a poker table!

Expert marksman and a guy you do not want to enter fisticuffs with! But it’s not his physicality that is so important but rather his telepathic and telekinetic abilities, both of which would no doubt serve as quite a big boon to his gambling endeavors!

And, should the game go awry, he could always count on his brawn to “level the playing field!”

Last but certainly not least, we have none other than the most mischievous Marvel comic character in existence: Loki! A guy like him needs no introduction and neither do his powers — powers which are abundant in number and astounding in depth!

NOTHING IS IMPOSSIBLE FOR LOKI

He is a jack of all trades and would, without a shadow of a doubt, dominate in all forms of gambling — through deception and manipulation, of course!