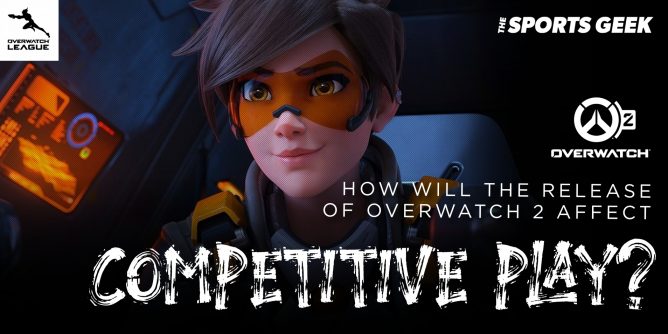 The release of Overwatch 2 is right around the corner and that begs a very interesting question: how will it affect competitive play? It’s an important question, too, given the current state of this oh-so-peculiar MOBA-like FPS.

Overwatch is not in a healthy condition nor is its outlook particularly promising. In fact, if you were to claim that the IP is “dead” and that it has no long-term potential, it’d be mighty hard to argue otherwise and come up with a solid enough rebuttal.

Simply put: Blizzard dropped the ball whenever and wherever they could. They had a “winner” on their hands but it obviously didn’t matter. Those in charge made one bad call after another, and after a while — once these decisions had piled up — it all came crashing down.

The pandemic obviously didn’t help, either, but if Riot could handle such challenging circumstances and have its biggest titles thrive and persevere, then there’s really no excuse for Blizzard — or any other company of its size and scope.

Overwatch 2 has been a long time coming. In fact, the game was announced a whopping two years ago. That’s an eternity in esports terms. Only the most staunch fans are still eagerly awaiting its release, but their number is quickly dwindling, too.

VALORANT has also taken the world by storm and is undeniably more popular these days than Overwatch ever was. The same goes for its competitive side as well — Riot’s FPS is bringing in astounding numbers and is one of the most popular esports titles on the planet.

It’s free, too, which means that players can experience its splendors without having to whip out their wallets; that, in short, is quite a huge benefit. Blizzard, therefore, is kind of fighting on multiple fronts, and we seriously doubt they’ll win any of these “battles.” They’re looking to find redemption after dropping the ball with the original game but they’re also faced with more opposition than ever before — and it’s quite fierce, too!

The release of Overwatch 2 will give this highly idiosyncratic IP a new lease on life. That, however, will not be enough for it to once again become relevant. Blizzard are behind the curve on this one and, by the looks of it, they’re still not quite sure how exactly they want to go about it.

They rested on their laurels and took their success for granted. We’ve seen it many a time in the past: hubris and ignorance, the unwavering belief in one’s calls and decisions, no matter how egregious and out of touch with the community they might be.

The folks over at Blizzard are guilty of many different things and transgressions, so the fact that competitive Overwatch sort of died out (including the game itself) should really come as no surprise.

But we really shouldn’t be all doom and gloom about it just yet. There are many different reasons for one to be hyped about what’s coming our way: new game modes, maps, heroes, balance changes, the shift to 5v5, and — perhaps most importantly — a whole new season of the Overwatch League.

Will these new additions make the game relevant again? We don’t think so, but they will at least give it a fighting chance. It’ll have an easier time competing with VALORANT and many other titles that have crept up in popularity over the last two years.

There’s still a large number of people who are in love with Overwatch and its competitive scene. The game itself is still exceedingly entertaining and if Blizzard can make the right calls and truly imbue the sequel with the kind of passion and originality we’ve come to expect from them, they will stand a chance.

A Unique Kind of ‘Beast’

Overwatch has no equal from a gameplay perspective. It is a most fascinating assemblage of genres and styles, of eclectic heroes and lore that’ll make you water at the mouth. The same holds true for its competitive component as well — it is as electrifying and entertaining as it gets, especially at the highest of levels when some of its best players step foot on stage to compete and start trading the heaviest of blows.

Have Blizzard “learned their lesson?” Are they fully aware of their past mistakes? Have they found a way to once again pique everyone’s interest? There are all endlessly important questions, and the fact that Overwatch 2 doesn’t look all that much different may as well be a reason for alarm.

You can’t just put on a fresh coat of paint, conjure up a few new heroes and call it a day. It’s really not that simple. One could argue that Blizzard have sort of exhausted this intellectual property as best they could and have reached a dead end.

The many changes which they’ve made are all generally positive, but will they be enough? Will they accumulate and actually make a difference? The fans don’t want a slightly better Overwatch but a more balanced one; it will also have to bring something unique to the table as well and win them over much like the original did way back when.

If it’s just more of the same then it’s not going to keep their interest. Having new game modes to explore and new heroes to play is great but it’s just not enough — that, too, will become boring in a few weeks or months’ time.

The same could very well happen with professional play as well. The first few months will surely be packed with action and entertainment, but unless competitive Overwatch happens to evolve, a certain kind of exhaustion and saturation will kick in.

Blizzard needs to stick the landing on this one. There’s really no other way to say it.

“With each map, we are trying to find the ‘Golden Moment’ through the cities’ architectures, culture, vision—and we want that to come across in our design.”

The Overwatch team discuss their design philosophy when creating new maps for Overwatch 2.

As already mentioned, Overwatch 2 will bring a host of new features and unique adjustments compared to the original game. It might still have the same “core” (or DNA, rather), but these nuanced differences should, by all means, make it feel ever so slightly novel and refreshing.

That’s vital for as struggling an esport as Overwatch.

Heck, the shift to 5v5 alone could make things a lot more “watchable” and visually comprehensible. We still don’t know what the meta will be like, though, and that could make or break the whole entertainment aspect of it.

There’s also the question of jadedness: have people gotten bored of Overwatch? That is a question we simply cannot answer with confidence at this point in time, but it, too, is of paramount importance. It’s been over six months since the last time the Overwatch League was in session and, well, a good number of people might not care any longer.

Blizzard’s track record also warrants some worry. The Blizzard we now know and talk about is by no means the Blizzard of yore, and that’s something that cannot be overstated. They’ve done very little to warrant our trust and it’s just hard not to be wary of things going awry further down the line.

They were “set up” for success and yet they botched it beyond measure. Granted, there’s a different bunch calling the shots these days which could, in theory, make a big difference, but until we see actual, tangible results we’ll keep being reserved — and rightfully so.