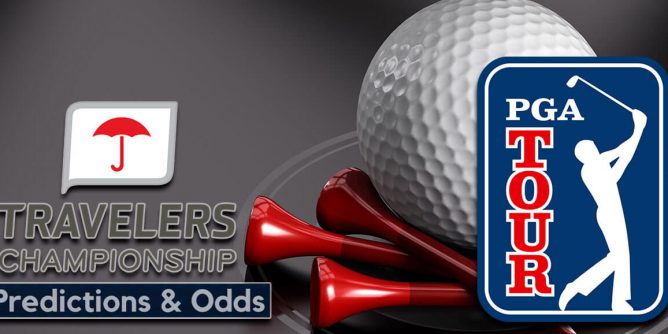 The week after the US Open features TPC River Highlands for the Travelers Championship in Connecticut. It’s hard to look at US Open highlights after one of my golfers, Will Zalatoris, just missed out. This after I’ve had Matt Fitzgerald in a few close calls in other tournaments in 2022.

“This one hurts in particular pretty hard, but it’s motivating. I’ve got to keep doing what I’m doing. I know I’m going to get one sooner or later”@WillZalatoris has proven he has what it takes. pic.twitter.com/ofJe3jDpyS

Despite a major just last week, you will find Scottie Scheffler, Rory McIlroy, and Justin Thomas on the Travelers Championship odds board.

Fitzgerald will not be in the Travelers Championship field this week. He is off celebrating his US Open win and doesn’t have much time for the Travelers.

Following the US Open, more golfers are taking the guaranteed money and going to the LIV Tour overseas. Brooks Koepka is gone to LIV after criticizing the tour earlier. He joins rival Bryson DeChambeau in Europe.

What is there to complain about when I had a Charl Schwartzel ticket to win the first LIV tournament. That was frustrating with Zalatoris coming that close, but let’s finish this time and beat the Travelers Championship betting odds with a winner. You can find our best Travelers Championship picks down below. Also, check out the top golf betting sites online.

The Travelers Championship is the hangover following the US Open. It must be frustrating for guys like McIlroy and Scheffler that came close but lost last week, but they have nothing to feel down about after winning tournaments this year and collecting a nice chunk of the US Open purse.

✔️ Amazing finishes
✔️ Epic moments
✔️ A round for the record books

The all-time best shots from the @TravelersChamp has it all ⛳ pic.twitter.com/EybAMnxWNm

Harris English won as a longshot at the Travelers last year. He shot -13 to par with a score of 267. A familiar player won in 2020, as LIV’s Dustin Johnson won with a 261. He played in the US Open, but will not take part in smaller tournaments.

Bubba Watson has killed it at River Highlands since 2010. He’s won the Travelers Championship three times, with the most recent in 2018. We don’t have to worry about Watson because he is on LIV Tour and won’t play for his fourth title this week.

There are no surprises with the Travelers Championship odds. This is pretty well what I expected from the oddsmakers.

Rory McIlroy is the co-favorite to win at +1000. He missed winning the US Open, but won a thrilling Canadian Open the week before.

McIlroy has never won a Travelers Championship. Winning two tournaments in three weeks is never easy, but the oddsmakers and public like him at the Travelers.

He’s always well-liked by the public, so any time McIlroy plays, he will be one of the favorites. Scottie Scheffler is tied with McIlroy at +1000 to win the Travelers Championship.

In recent tournaments here, Jordan Spieth has been among the more well-known golfers to win the Travelers Championship. He had a clean performance in the 2017 event for a win in Connecticut.

Spieth hasn’t been making as much noise as he used to in the past, but he’s quietly been playing solid golf as of late.

He’s not making the headlines and playing like Scottie Scheffler in 2022, but at a course he knows well, this looks like a good opportunity at these odds.

After struggling in the Masters, Spieth responded to win the RCB Heritage. He was sharp at -13 to par and then beat Patrick Cantlay in a playoff.

Spieth returned in his next tournament to finish 2nd behind winner K.H. Lee at -25 to par. He also finished T7 at the Charles Schwab Challenge on May 29, less than a month ago. At +2200 to win the Travelers, Spieth has to be considered.

Sam Burns has the best Travelers Championship betting odds amongst our Travelers picks this week. He’s been one of the most consistent golfers this season and is likely going to score a win eventually.

It was very much like that for Matt Fitzpatrick. He kept plugging away and getting close before breaking off for a win.

Burns is likely going to do the same before long. He has finished in the top-10 eight times this season. There are only two other golfers that have more, which includes Justin Thomas and Scottie Scheffler.

He’s also second in the FedEx Cup standings with 2,258 points in 18 events. Burns enters the Travelers Championship T4 in SG: Total, too.

Burns won the Charles Schwab Challenge on May 29 in a playoff over Scheffler. He followed up to finish T4 in the Canadian Open two weeks ago. Despite finishing T27 in the US Open, Burns should get involved on Sunday.

The biggest sleeper of the Travelers Championship has to be Davis Riley. He’s on the brink of being a star on the PGA Tour and should hoist a tournament trophy soon.

Riley is in the running for Rookie of the Year on the PGA Tour. I can’t argue with the 25-year-old being considered as ROY this year.

Given his recent form, Riley continues to improve and likely isn’t going to slow down through the summer. Since the Valspar Championship, he’s finished at least T10 in five of ten tournaments.

He came close in the Valspar for 2nd, T4 in the Charles Schwab Challenge, T9 in the Byron Nelson, and T4 in the Zurich Classic with his partner. Riley at +3300 to win Travelers looks like top value this week.