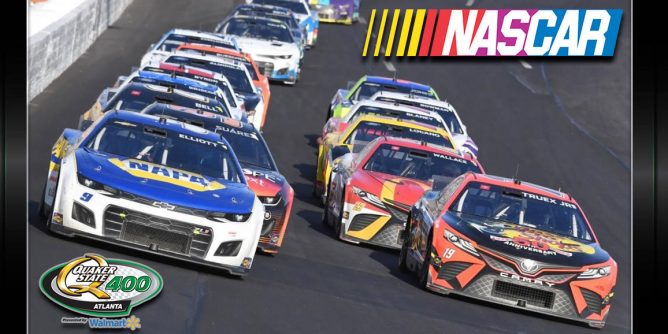 The Cup Series is back to the oval this weekend in Georgia at Atlanta Motor Speedway. We are looking at the best Quaker State 400 odds for this Sunday.

NASCAR fans that despise road races will be happy to see the schedule is back to an oval, a 1.5-mile tri-oval, to be exact. The track was redesigned for the 2022 season.

I’m one of those in the camp that doesn’t find NASCAR raod racing all that exciting. This coming from someone who loves Formula 1. Three road races would strike a nice balance, but they’re putting too many road races on the schedule to try and keep pace with the popularity of F1.

Tyler Reddick wasn’t on most bettor’s radar. He got the win on the road last week at Road America. Reddick beat Chase Elliott, Kyle Larson, and Ross Chastain for the win.

I had Larson and Chastain, so if you took them to finish in the top-5, that worked out well. Elliott had another strong race, as he continues to lead the Cup Series standings. He’s going into Atlanta with 624 points and two wins.

This is the second stop for the Cup Series at Atlanta Motor Speedway. William Byron won the first Atlanta race on the redesigned track on March 20. Chastain followed behind him to the checkered flag.

Larson is creeping up in the Cup Series standings. The defending champ is tied with Elliott for the best odds to win the 2022 Cup Series title. When the playoffs open, anything could happen, with Elliott and Larson at +500 to win.

The first thing that stands out in Atlanta is that there isn’t a clear favorite on the Quaker State 400 odds board. The NASCAR Quaker State 400 betting odds are consistent among the top contenders.

NO CONSENSUS TO WIN THE QUAKER STATE 400

Elliott and Blaney have leading odds to win at Atlanta Motor Speedway. Both are currently +1000 favorites, though there are several drivers not that far away. Chastain is at +1100 while six other drivers have Quaker State 400 odds +1400 or less.

The winner from last weekend, Tyler Reddick is +1600 to follow up with another win. This is a rare week where Larson isn’t in the top-3 on the odds board. Heck, he isn’t even in the top-5. Larson is tied with Joey Logano and Kyle Busch at +1300.

Ross Chastain gave it a solid go on the road course last week. He finished P4 for a quality showing. That’s been the mantra for Chastain this season.

Chastain is consistently performing well and threatening for wins.

He has a couple of victories this season and nine top-5 finishes. After last week, there isn’t another driver in the Cup Series that has finished in the top-5 as much as Chastain this season.

He’s 3rd in the Cup Series standings going into Atlanta. Chastain has a 36-point edge on Larson for this race.

Chastain finished behind Will Byron in the first Atlanta race in March. It was a strong P2 performance despite blowing a tire and going into the wall.

He was leading for 42 laps before a tire blew. If it wasn’t for the tire, Chastain might have won. His car was fast on that afternoon.

Staying out of the wall and running a clean race will be his key to success on Sunday afternoon. Do that, and Chastain will have a strong opportunity to land in Victory Lane for the third time in 2022.

There are several drivers with NASCAR Atlanta odds between +1000 to around +1500 for a winning day on Sunday. You will have to do your homework if you’re looking for a little more of a value play on a longshot.

Kurt Busch stands out on the Atlanta Quaker State 400 odds board. He’s a veteran that isn’t getting the most respect these days, but he’s had a fine season, which includes a win and five top-5 finishes.

The prime years of his career are in the past. He’s not going to find a top ride at this point in his career, but Busch is making the most out of the 2022 campaign. Busch is 15th in the Cup Series standings with 424 points.

He’s had success before at Atlanta Motor Speedway.

It’s not an outlier. Busch has consistently had success at this track. Busch won this race last July and followed up nicely in the first event on the reconfigured Atlanta Motor Speedway in March.

Are you looking for a bet that is different from the top contenders? I recommend considering Kurt Busch on Sunday. He has enough value to consider winning the Quaker State 400.