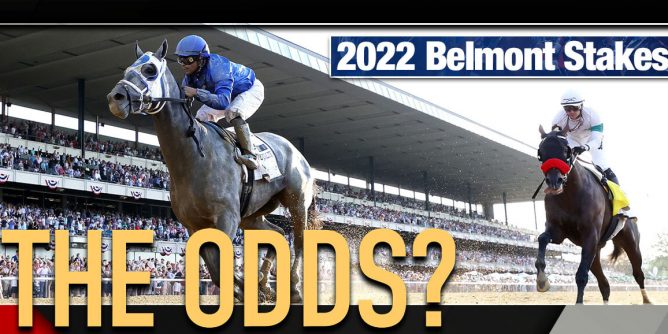 Elmont is on the border of Queens and Long Island, with it within reach of a drive from NYC. As the finale for the Triple Crown, this can be one of the biggest races in the world or just another stakes race.

If there’s the potential for a Triple Crown winner, it’s a highly anticipated event. Otherwise, the Belmont Stakes is a fancy Grade 1 stakes race worth $1,500,000.

It’s tough for a longshot to follow up in the Triple Crown, but trainer Eric Reed is affording him the best chance to win following a break following the Derby. This isn’t the toughest Belmont Stakes field as well.

How To Bet On Belmont Stakes

There are multiple ways to bet on the Belmont Stakes. For a win bet, you can go through the sportsbook or racebook.

The sportsbook option is a fixed bet on the Belmont Stakes odds. In other words, the price you bet is the payout you’ll receive for a winner. Conversely, pari-mutuel betting from the racebook is a pool.

If you bet the racebook Belmont Stakes odds, the morning-line does not necessarily reflect the payout. The payout could be greater or less than the morning-line odds depending on how the pulic bets the race. You’ll need to wait until the gate opens for the final pari-mutuel odds and your payout.

Are you looking for a bigger payout on the Belmont Stakes? You can play an exacta, trifecta, or if you’re feeling really fortunate.

The exacta is selecting the horses to finish 1-2, trifecta 1-2-3, and you guessed it, the superfecta is correctly selecting the 1-2-3-4 finishers.

We are looking at this just being another Grade 1 stakes race without a Triple Crown bid on the line. Mo Donegal is the betting favorite at Bovada to win the Belmont Stakes. He participated in the Derby and was 8-1 on the morning-line to win.

Mo Donegal had the No. 1 post position, which wasn’t the best draw for the Derby. He finished 5th, which was just about around his expectations. His team earned $90,000 win finishing 5th, and is now looking to add a Belmont Stakes to his resume. Mo Donegal has the best Belmont Stakes odds to win on Saturday.

Trainer Eric Reed shares with us what riding instructions he gave to Jockey @SONNYLEON1 in the G1 Kentucky Derby. Will their team get another victory in Saturday’s G1 Belmont Stakes?

Watch the full feature here: https://t.co/7BhtZVJYmP#BetWithTVG on all the action June 11! pic.twitter.com/c1pbyQ4VaQ

What do I think about Rich Strike? Everything needed to fall into place perfectly for Rich Strike to win the Kentucky Derby. Sonny Leon piloted the race of his career to find room to get through traffic and to the rail. The Belmont Stakes isn’t as tough, but he’ll need to find the right trip again.

Ethereal Road was the horse scratched for the Kentucky Derby, which ultimately allowed Rich Strike to enter and win the race. Ethereal Road passed on the Preakness. It was probably for the best because he’s in his best form now.

He is coming off a win in the $100,000 Sir Barton Stakes on May 21 at Pimlico. It wasn’t a close race, with Ethereal Road drawing clear by 4 ¾ lengths at the wire over B Dawk. This was the fastest speed rating for Ethereal Road in his career.

Ethereal Road was clocked at 100, an improvement from his second-fastest race a month earlier at Keeneland in the $400,000 Stonestreet Lexington Stakes (Gr. 3). He finished 4th in that one, but was in the mix by 3 ½ lengths behind the winner.

He’s open to further improvement after his win in the Stonestreet Lexington Stakes and has to be considered as a longshot to win the Belmont Stakes. If Ethereal Road continues getting better, he’s going to be in the mix for D. Wayne Lukas.

The $230,000 We the People is looking for his fourth win in five attempts. After a strong run in the $200,000 Peter Pan Stakes, We the People appears well-prepared to take a run at the Belmont Stakes title.

After opening up a perfect 2 for 2 at Oaklawn Park, We the People had his worst run in the Arkansas Derby for a $1,250,000 (Gr. 1) prize. We the People finished 7th after a lot more was expected. He was the second favorite, but had an empty performance.

We the People had a speed rating of 101, significantly up from the 75 in the Arkansas Derby. He was clocked at 99 and 91 in his first two trips.

We the People beat Golden Gilder by 10 ¼ lengths in a blowout in the $200,000 Peter Pan Stakes (Gr. 3). That’s more like the We the People that was expected on the track in the Arkansas Derby.

WE THE PEOPLE all alone at the wire 🤩 Easiest of winners today ⁦@TheNYRA⁩ in the G3 Peter Pan. pic.twitter.com/wQmxK51ws9

In his latest workout, We the People was in good form with a time of 47.59 seconds at 4 furlongs on June 4. He appears well on track to run the best trip in the Belmont stakes.